Research projects conducted from the Museum largely address aspects of biodiversity in relation to various land use situations. Most of these projects are components of the graduate programs of M.S. and Ph.D. students and are funded by a variety of state and federal agencies. Other projects that are being conducted by the Museum Director address phylogenetic questions. Some of our projects are as follows: 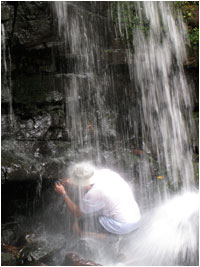 The aquatic insect fauna of Thailand.

We have been collecting aquatic insects in Thailand for the past 15 years and have taken over 1,000 samples from throughout the country. As such, we have many thousands of vials of specimens representing all aquatic orders. With cooperating systematic specialists for various families and higher taxa, Dr. Akekawat Vitheepradit (Kasetsart University) and I are endeavoring to prepare an exhaustive reference for the aquatic insects of Thailand, to include taxonomic keys to the genera of all aquatic insect forms. Dr. Michael Whiting will conduct molecular fingerprinting to match unknown larvae with identifiable adults for the problematic Odonata, Coleoptera, and Diptera. We are currently searching for a source to fund this project.

Samples were taken at four time intervals following the devastating tsunami of 2004. Approximately 20 ponds along the coastline in Thailand were chosen, roughly half within the devastated area and half further inland, to determine the rate at which the lentic insect fauna becomes re-established. In addition, a series of peat swamps were sampled and the results will be compared with those of Watanasit (1995) for direct pre- and post-tsunami sampling.

Biodiversity and biogeography of aquatic Heteroptera of Thailand (NSF)

The aquatic Heteroptera fauna of distinct mountainous regions from the northern regions near Chiang Mai through the Isthmus of Kra to Malaysia will be examined and community similarity examined to determine if a natural barrier to the distribution of species exists at a definable point in the latitudinal distribution of the mountains. Further, particular ubiquitous species will be selected and molecular genetics examined to estimate the degree to which the mountains act to isolate populations.

The aquatic Heteroptera fauna will be sampled at distinct elevational increments on Doi Inthanon and Doi Suthep to determine if the communities in what ways the communities are associated with elevation. Many new species are being described in the following families: Aphelocheiridae, Helotrephidae, Naucoridae, Nepidae, Gerridae, Veliidae, and more.

The family Naucoridae includes 36 currently recognized genera, which have been assembled into 5 subfamilies. No phylogenetic analysis has been performed on these taxa, in part because of the difficulty in using morphological characters. Thus, we are conducting a phylogenetic analysis using both morphological and molecular data. Currently, we are trying to obtain as many genera as possible in 100% etOH. We sincerely thank Herbert Zettel (Natural History Museum - Vienna) and Michael Whiting (Brigham Young University) for providing some important SE Asian and other genera for our use.

The goal of this study was to examine aquatic insect, amphipod, and isopod communities and associated habitat gradients in eight low discharge rheocrene spring systems in the prairie and Ozark regions of Missouri. Taxon presence and density will be associated with a suite of environmental parameters.

Larval Odonata were sampled from >100 prairie ponds in northern Missouri and community associations with existing ecoregionalization schemes and vegetation zones analyzed. Many range extensions were recorded and taxonomic enigmas solved.

Immature stages of assorted species of Naucoridae from various parts of the world are being described. These specimens were collected during sampling for other ecological and faunistic projects.